Victoria Falls presents a spectacular sight of awe-inspiring beauty and grandeur on the Zambezi River, forming the border between Zambia and Zimbabwe. It was described by the Kololo tribe living in the area in the 1800s as ‘Mosi-oa-Tunya’ – ‘The Smoke that Thunders’. In more modern terms Victoria Falls is known as the greatest curtain of falling water in the world.

Columns of spray can be seen from miles away as, at the height of the rainy season, more than five hundred million cubic meters of water per minute plummet over the edge, over a width of nearly two kilometres, into a gorge over one hundred meters below.

The river’s annual flood season is February to May with a peak in April. The spray from the falls typically rises to a height of over 400 metres (1,300 ft), and sometimes even twice as high, and is visible from up to 50 km (30 miles) away.

During the flood season, however, it is impossible to see the foot of the falls and most of its face, and the walks along the cliff opposite it are in a constant shower and shrouded in mist. Close to the edge of the cliff, spray shoots upward like inverted rain, especially at Zambia’s Knife-Edge Bridge. 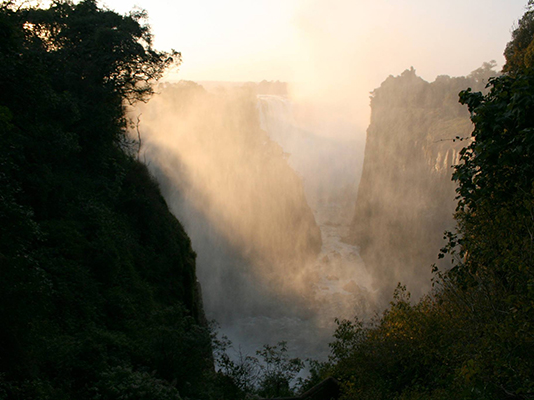